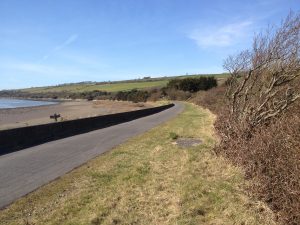 The old railway formation is now occupied by the popular Tarka Trail and South West Coast Path. There is ample width (25 feet/ 8 metres) for the new railway to share the formation alongside the leisure path, and the railway’s low-impact construction will be sympathetic to the successful leisure trail (a shallow kerb will separate TawLink from the leisure path.) The formation between Pottington and Velator is also used by concrete flood defences and by a transatlantic data cable. In the not-too-distant future, these will both be due for renewal, at which point the new railway can be accommodated.

At certain points (most recently at Wrafton) the old railway formation has been built upon. For a light railway, a short deviation from the original course is not a problem. A new TawLink bridge will be built over the river Yeo, alongside the existing cycle/pedestrian bridge.